When looking for good examples of risk assessment for ISO 27001 related processes, in order to improve your own process, consider non-IT organisations that use risk assessment. An example is the fire service. Upon attending the scene they don’t stand around filling in a risk assessment before getting out the hoses, but when an incident commander arrives to assist the initial response, the incident commander takes a step back, collates information from what’s happening and starts assessing the risks. The reason the fire service does this, is because they don’t want firefighters becoming so focused on fighting the fire that they overlook an obvious danger, such as operating out of range of timely colleague support, or by walls in danger of collapse. 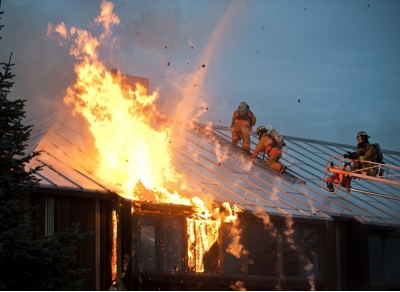 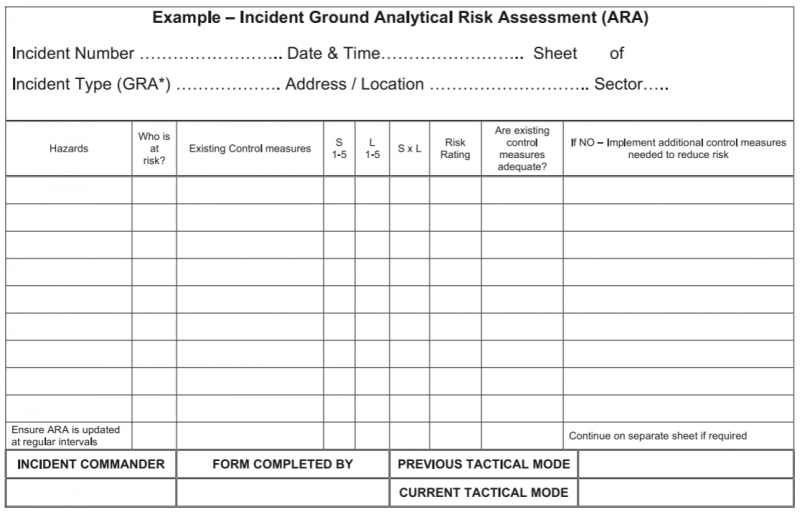 So the above is a good example of a basic risk assessment for a new scenario that you can complete under pressure, whether it’s coordinating fire crew teams or (with some slight alterations) as a busy project manager with a new IT project. The key points of the form are similar to all risk assessments: what hazards are there, what current controls do you have, what’s the impact and likelihood and is the result higher than your acceptable risk appetite? If it is, what do you need to bring it back to an acceptable level? In short, keep the forms simple and avoid complexity where possible.

If it is not possible to reduce the risk to an acceptable level, it’s time to take a decision: perhaps a fire officer might have to decide whether to commit two fire service staff to quickly drag a casualty out from a unstable structure that’s potentially about to collapse further? In the IT world, is the business going to accept the higher risk of an immediate situation in order to be first to market with a product? If so, someone will own that risk.

Be More Adventurous with Considering Sources of Risk

At the more strategic level, companies sometimes don’t think about what’s a realistic threat from risk scenarios. Try and be broad minded. Try and think of new and inventive threats. Two good examples of sources not normally considered are nation state interference and terrorism.

Ask most companies if their risk assessment includes terrorism and they might talk about how they are considering putting in anti-ram bollards at the front of the reception building. Although possible, this isn’t a realistic assessment of the threats from terrorism that an average company is likely to face (but might be useful if ram-raiding is a realistic threat in your industry or locale). Let’s break down what a terrorist group typically does:

The second bullet point, fund raising, is where the most likely contact will be with the average business (with some common sense assumptions). Terrorism funding in the past has typically revolved around fraud and blackmail/extortion.

It’s well worth searching for and reading articles about historic arrests and reports about the fundraising and extortion activities involving terrorist groups. Well known examples include organisations threatening persons who originated from the troubled country, now living in Canada and Europe. This includes demanding that they transfer large sums from the victims businesses. Other detected activities included phishing campaigns to access bank accounts and fraudulent transfers through holding companies.

What does this mean? The most likely terrorism related activity you may see is blackmail of staff or fraudulent customer account activity. As such, if not already in place, consider strengthening controls to target that risk such as:

Most companies just give up on this one and claim it’s impossible (or the stuff of conspiracy theories) and therefore not worth considering. In addition a cynical person might state that a popular modern move is that when your company gets hacked you state that a nation state must have done it, which carried with it the idea that it was impossible to defend against and therefore no one in the company is guilty of negligence.

Why Would a Nation State be Interested in Us?

In a similar fashion to how nation states don’t “hack everyone’s computer”, nation states aren’t going to “hack every company”. It’s prohibitively expensive and increases the risk of detection. The more companies are targeted, the greater the risk of any valuable not-yet-publicly-known exploits (zero days) used for the attack might be discovered and published, leading to the vulnerabilities being mitigated by vendors and political embarrassment [1]. They might however take interest in you in specific circumstances (these suggestions are not exhaustive):

If Your Company Provides Services to Users

With the exception of the last two entries, the target is third parties using your service. An important note is that political friendliness between companies is not relevant for the purposes of considering the above (governments are not a single person, and can be both friendly and malicious at the same time). An example if the US monitoring of UK mobile phones and landlines outside of the agreement under which the facility was provided to the US by the UK [3].

If you provide any form of service that centralises information about people, their communications or a service that links to their devices, then your service might be of interest to nation states, regardless of if your willingness to participate in that program. Whilst you may see your own government as benign (rightly or wrongly), the governments targeting your users may not be. Hence raise the bar to increase the expense any nation state would have to go, to attempt to monitor your users. Whilst nation states may have large resources, the hardening of the services you provide creates the need for them to have to deploy an expensive manual resource (such as a technician, or team of technicians, to research a user and break into their account) as opposed to the relatively cheap ability to monitor all your services users via automated means.

To expand on this, nation states have large but still not unlimited resources. A government employee devoted to watching each individual at all time just isn’t sustainable. What is within the realms of possibility is to perform very basic monitoring of the major communications channels, such as with flags to denote potential targets of interest for manual review, and then closely monitor your biggest suspects.

An example would be keyword matching in phone text messages: not every text mentioning “bomb” in it will be of interest and there would be false positives, but it’s enough so that the problem is no longer an impossible number of texts to be reviewed but more an interesting technical challenge to make the system more accurate such that the most suspicious texts matching specific selectors can be followed up with further review. An example is a case of UK person sending song lyrics which triggered an alert [4], which is a likely result of this. The monitoring would be phone-network wide as a fairly inexpensive facility, the alerted text would have matched an automated selector check, and would have gone for (more expensive) manual security analyst review. The police response was the labour intensive final step reserved for the most likely suspicious texts, with statements about the text message being sent to the wrong number likely being to reduce the damage of procedure exposure:

In a similar fashion, capturing all data traffic sent via major internet service providers in your country would be extremely expensive, but net flow monitoring of the same connections becomes just a reasonably large-budget project. A government don’t need to hack each individuals computer – that would be time consuming (and hence expensive), and greatly increase the chances of detection – but you can flag potential targets using blanket monitoring so that a minor handful of targets then receive special (expensive but for a greatly reduced target set) treatment. So in short:

If You Are Financial, or Involved in Large Contract Bidding

Consider if the organisation is providing a service or bidding for work that might attract nation state interference, such that inexpensive drag-net monitoring is overtaken by focused (more expensive) directed government attacks. If not already doing so, consider implementing or strengthening the following controls: